Sixties Soul meets Big Band charm. Here we have the American soul singer Jimmy Ingram meeting the trumpet player and big band leader Kiko Gatchalian. They are backed by a band made up of servicemen and Filipino musicians based at The Coconut Grove airmen’s open mess at the American airbase in Clark, Pampanga. 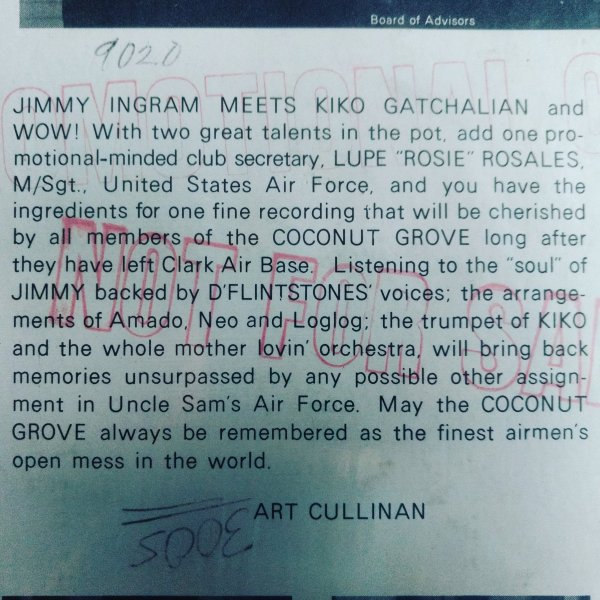 I have selected 5 of the standout tracks from the album for your listening pleasure.

‘Who’s Making Love’ is a song written by Stax Records staffers Homer Banks, Bettye Crutcher, Don Davis and Raymond Jackson and recorded by singer Johnnie Taylor. Released on the Stax label in the late summer of 1968.

‘Everybody Loves A Winner’ originally released by William Bell in 1967 on the Stax label.

‘I’ve Never Found A Girl’ written by Alan Isbell, Booker T and Eddie Floyd who released it on his 1968 album of the same name on the Stax label.

‘The Chokin’ Kind’ is a 1967 song, later recorded by Joe Simon in 1969, written by Harlan Howard. The original version of the tune was released by Waylon Jennings in 1967. The single became Joe Simon’s first number one on the R&B charts release on the Sound Stage 7 label.

‘Poor Side of Town’ is a blue-eyed soul song by Johnny Rivers. Al Wilson also released a version of the song as a single from his 1968 album, ‘Searching for the Dolphins’ on the Soul City label.